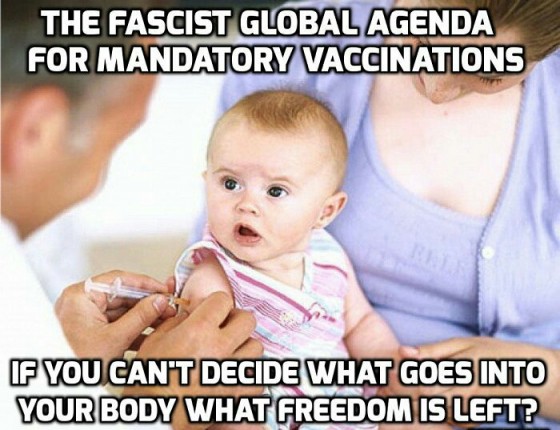 Interesting times in Colorado for parents who take a stand against forced vaccinations. Imagine receiving a letter from a state health department stating that you are required to register your non-vaccinated child with the state. Colorado parents found this in their mailbox, which means their children would be identified as “unvaccinated” in government database. Fortunately, the demand was found to be unconstitutional, but these actions display a coordinated mechanism which is in place to potentially forcibly gather this information, thus thwarting free will and parental rights. Preventing its passage forced a pause in the fight against medical fascism.

As reported by Off The Grid News:

“A number of parents received a letter this month from the Colorado Department of Public Health and Environment, which said in the document that parents of unvaccinated children in school would be required to register and exempt their child through a state website.

“The department later said the letter should not have been released.  The requirement would have been mandated by House Bill 1164, which died in a state legislative committee earlier this week.

“Currently, parents tell the local school – and not the state – that their children are not vaccinated.”

Colorado Representative Patrick Neville, a Republican who quickly recognized that the proposed bill upon which the letter was based, said the bill and letter were unconstitutional. He was adamant about the rights of parents, like himself. He told CBS news: “They’re [The Colorado Department of  Public Health and Environment] reaching beyond their statutory authority to collect data – private health data – on our kids.”

Currently, parents in Colorado do have to notify their children’s school if they are not vaccinated. This bill and the letter following it was an ominous threat, according to the advocacy group, the National Vaccine Information Center (NVIC), which does a mammoth service in keeping us informed about laws to restrict medical choice. NVIC’s Theresa Wrangham was in Colorado to speak against the bill. CBS news reports:

“It’s a data grab. They want to populate the vaccine registry and they want to know exactly who’s exempting from which vaccines, where they live and I think it’s a harassment technique,’ said Theresa Wrangham with the National Vaccine Information Center... ‘This is misleading to parents and it’s drawing a line of discrimination against those who take these exemptions. It is their legal right to take an exemption and now we’re going to trick them into a registry and be tracked,’ says Wrangham.”

This was a clear case of a government agency acting as if a House bill were already passed, even though it wasn’t. Another Colorado Republican State Representative, Senator Kevin Lundburg, not only opposed the bill, according to Off the Grid News, he called out the Health Department:

“‘I find it curious that the House has already killed 1164, whereas the health department has already implemented the provisions of 1164 in law on their website stating that by July 1, parents will be required to register online,’ Lundberg said. ‘This online registration system is in complete violation of current statute. They don’t have the authority to require an online registration.’”

This coordinated effort, even though it was illegal, in still on the march. Other bills concerning vaccinations are being debated  in Colorado.  Stay on the alert in your state. And, let food be your medicine.