After blatantly lying about vaccines and fluoride, AP declares it will join Facebook effort to censor “fake news” 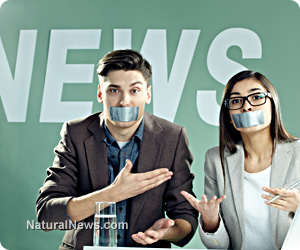 The Associated Press won’t report on the vaccine court, which grants unlimited liability to vaccine manufacturers when their products do harm to people. This kangaroo court has paid billions of dollars to families damaged by vaccines, mainly to keep them quiet. Meanwhile, dangerous vaccine science continues to be peddled and sold. And the AP just continues on with the same beloved narrative that all vaccines are safe and effective. The AP is often caught repeating vaccine industry lies. For instance, the AP often claim that mercury has been “phased out” of all vaccines. However, ICP-MS lab tests confirm that there are 51 parts per million of mercury in a flu vaccine which is over 25,000 times the EPA’s maximum allowable concentration of mercury in drinking water. The CDC even admits that mercury hasn’t been completely removed, but the AP is the standard bearer of news, so why doubt them, right?

In much the same way they promote vaccine industry lies, the Associated Press will continue to promote the addition of fluoride byproduct chemicals to municipal water supplies. Even though multiple studies, including one from Harvard, linked fluoridated water to lower IQ and all sorts of health problems, the AP is supposed to be obeyed on the issue of fluoride safety. One AP story criticized a St. Louis community after the municipality stopped adding fluoride chemicals to the water supply. The AP story also failed to distinguish naturally occurring fluoride and the toxic fluoride byproducts that are actually added to the water supply – hexafluorosilicic acid and sodium hexafluorosilicate.

The Associated Press promotes exactly what its masters want. When it comes to the news, there is no truth; there is billions of dollars worth of monetary interests on the line and people in power to protect. In this story, the AP tried to push the global warming narrative with a fake picture and caption, but were forced to retract it when the narrative was exposed.

Independent media, such as Natural News, only answer to the people, not large monetary interests. Independent media challenges the narrative of mainstream media by encouraging skepticism, dissent, opposing viewpoints, and a pursuit for underlying truth. The internet has become a battlefield of information, and mainstream media is losing listeners, readers, and viewers. People can no longer trust the mainstream media. Individuals are telling their own stories and reporting on matters that are real to them. Independent media is growing in popularity and has a wide outreach on social media platforms such as Facebook.

Facebook teaming up with the Associated Press to censor “fake news”

With a big audience and lots of power over information, Facebook itself has become a gatekeeper of news, capable of censorship. Earlier in 2016, a former Facebook employee spoke out about the impartial algorithms used to promote progressive news narratives while suppressing conservative news stories. Facebook has a list of “trusted news outlets” that they use to determine if a story is trending. The more a news story is repeated across the Associated Press, the more it will be promoted. This is one way Facebook suppressed independent media and dissent of the status quo in 2016.

Now the Associated Press has declared to join Facebook in their effort to censor what they call “fake news.” This effort only means that certain powerful interests will control the narrative on Facebook. No longer will these gatekeepers of information tolerate dissent or views that challenge the money interests that control them. Their narrative will be “verified” as “true news” while stories linking fluoride and vaccine ingredients to health problems will be flagged as “fake.” As ZeroHedge reports, through Facebook, the AP will be able to flag a piece of content and mark it as “fake.” Facebook users will see that the story has been declared fake; thus, the AP will have direct influence over people’s minds.

The “fake news” hysteria will easily be used to censor the truth and snuff out dissent, while controlling the narrative of what people think, do, share, and speak about. Vice President for U.S. News, Brian Carovillano explained how he and the AP will operate:

It is our job – more than ever before – to guide people to legitimate news and help them sort out “fake news” from the real thing. The AP has a critical role to play in fighting the scourge of fake news. We are not going to transform ourselves into the fake news police of the internet, but we are going to be more aggressive about knocking down fraudulent stories when we can.

The truth is: it is the duty of the individual to question and assess what they read, see, and hear. Freedom of the press is important for freedom of thought, for diversity. Freedom of the press prevents blind subservience to controllers and manipulators; meanwhile, Facebook and the Associated Press are becoming just that.