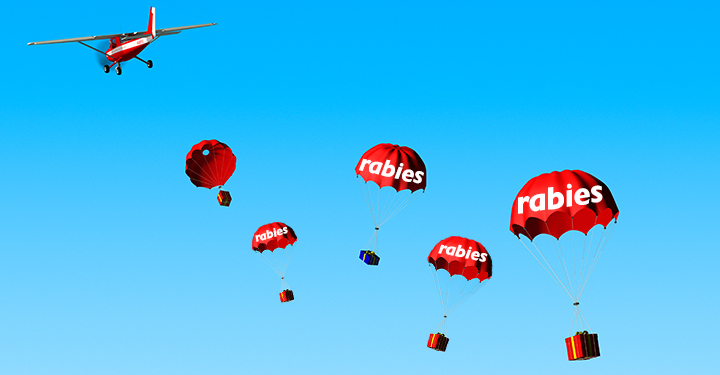 The World Health Organization (WHO) describes rabies as a “fatal zoonotic disease, transmitted to humans through contact (mainly bites and scratches) with infected animals.”  This condition kills 55,000 people worldwide every year, with nearly 100 percent of fatal cases occurring in Asia and Africa. Worldwide, another ten million people are exposed yearly, but, according to the Center for Disease Control (CDC), those who are exposed can survive by receiving a combination of injections. The current treatment includes “a dose of human rabies immune globulin,” along with a series of rabies vaccines.

In order to prevent rabies from spreading in wildlife areas, and to lessen the exposure to domesticated animals and humans, it has become a routine practice to “dump rabies-laced baits onto rural areas.” Dogs Naturally Magazine explains that these baits contain a genetically modified vaccine that has two viruses spliced together — the rabies virus, plus “vaccina, which is the immunizing agent used in smallpox vaccine.” Fox8.com reports that shortly after two rabid raccoons were discovered in Stark County, Ohio earlier this year, local officials contacted the U.S. Department of Agriculture (USDA). It is the USDA that will supply the planes, helicopters and the supply of recombinant rabies vaccine that will be dropped in not one, but three Northern Ohio counties.

Residents living in these areas have been advised to stay away from wildlife, to have their pets vaccinated and bring them indoors, and to put lids on any trash receptacles. While rabies is most often associated with wild raccoons, bats, skunks, coyotes and foxes, unvaccinated domesticated cats and dogs may be at risk. Ohio officials are depending on these air dropped baits to take care of the problem and, while they claim these will not harm pets, if an Ohio resident suspects their pet has accidentally eaten a rabies vaccine bait, they are advised to call a veterinarian.

Patricia Jordan, DMV and author of Dogs Naturally Magazine, is not convinced of this strategy. She explains that already weakened wild animals may not be automatically immunized by taking the dropped bait. Additionally, “splicing viruses can carry many risks” that are only now being understood.  There are instances in the United States where rabies has jumped from  bats to foxes to skunks with no bite required.” This is a serious concern for Dr. Terje Traavik from the Center for Biosafety, who suggests that rabies in humans could return “due to a virulence of the genetically engineered rabies virus with the pox viruses.”

Another way these recombinant viruses can be spread, says Dr. Jordan, is through aerosaolization, where no contact with saliva is necessary. A domestic pet would just need to be in close proximity to an infected animal. No bite is required.

NdHealth.gov explains that when animals first contract rabies, symptoms include being aggressive, not eating, being afraid of water and having “an unsteady gait.” As the rabies virus progresses, it travels to the brain. Paralysis and death occur soon after. In humans, the virus takes longer to manifest. Early symptoms are much like a cold or flu. In time, without proper treatment, a person can experience agitation and fear of water. In the final stages, paralysis sets in with the potential for cardiac arrest or respiratory failure within a few months, depending on the individual’s constitution.