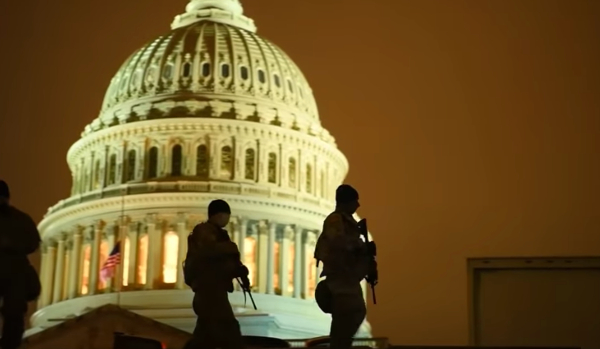 The Defense Department is apparently threatening to sort of ‘decertify’ the Oklahoma National Guard after its commander, on approval of the state commander-in-chief, Gov. Kenny Stitt, issued an order instructing his troops they will not be required to comply with Joe Biden’s unconstitutional COVID-19 vaccine mandate.

The Oklahoman on Nov. 12 provided some background on the situation:

In one of his first acts as the head of the Oklahoma National Guard, new Adjutant General Thomas Mancino updated the guard’s COVID-19 vaccine policy.

In a memo issued Thursday, Mancino ordered that no members of the Oklahoma National Guard be required to take a COVID-19 vaccine.

The memo obtained by The Oklahoman also notes “no negative administrative or legal action will be taken” against guard members who refuse the COVID-19 vaccine.

The memo came just one day after Gov. Kevin Stitt appointed Mancino to replace former Adjutant General Michael Thompson, who had served in that role since 2017.

“The clarified policy on COVID vaccinations for Oklahoma Army and Air National Guardsmen reflects the governor’s ability to assert his command authority over the men and women of the Oklahoma National Guard while they are within the state’s borders,” Lt. Col. Geoff Legler, a spokesman for the Oklahoma Guard, told the paper.

“At a time when our adversaries continue to increase their quantitative and qualitative advantage against our forces, we should seek to ensure that no policy, even unintentionally, hinders military readiness,” Oklahoma Sen. Jim Inhofe, the top Republican on the Senate Armed Services Committee, wrote to Defense Secretary Lloyd Austin. He added that the mandate should be immediately revoked so as to not cause “irrevocable damage to our national security.”

Of course, the regime doesn’t like to be told ‘no,’ so the Pentagon has dug in its heels, under the guise of the mindless commander-in-chief in the Oval Office, Joe Biden.

“Refusing to do that, absent an approved exemption, puts them in the same potential [for disciplinary action] as active-duty members who refuse the vaccine,” Kirby added.

He noted further that “the secretary of Defense has the authority to require these vaccines for all members of the force, including the National Guard … even in a Title 32 status. Because when they’re called up for their monthly training, they’re still federally funded.”

The mood in Oklahoma may be catching, according to the Washington Post:

The extraordinary move by Stitt has prompted interest among multiple governors and National Guard commanders to explore similar policies in their states, Oklahoma officials said, while leaving the Biden administration with little recourse but to hold individual service members accountable for refusing lawful orders that their immediate chain of command has disavowed.

Mancino defended his order, however.

“I did not initiate a civilian-military crisis just because I thought it was cool, right?” Mancino told several members of the Oklahoma National Guard in Oklahoma City, noting that by state law and military law he is bound to obey the order of the governor.

Now, however, the Pentagon may be realizing it is running out of options to actually force the members of the Oklahoma Guard to comply, according to a social media post this week.

“BREAKING: Defense official reportedly says, if the Oklahoma National Guard doesn’t comply with COVID vaccine requirements, they will no longer be ‘maintaining national recognition,’ thus, state will no longer have a Nat Guard, but rather a militia – VOA’s Pentagon correspondent,” the post from Insider Paper, which is a blue-check verified account, noted.

In other words, the Oklahoma National Guard will revert back to the status it and the other state Guard units held for decades until they became sort of, kind of, federalized last century.

To which the state should respond, “So what?”