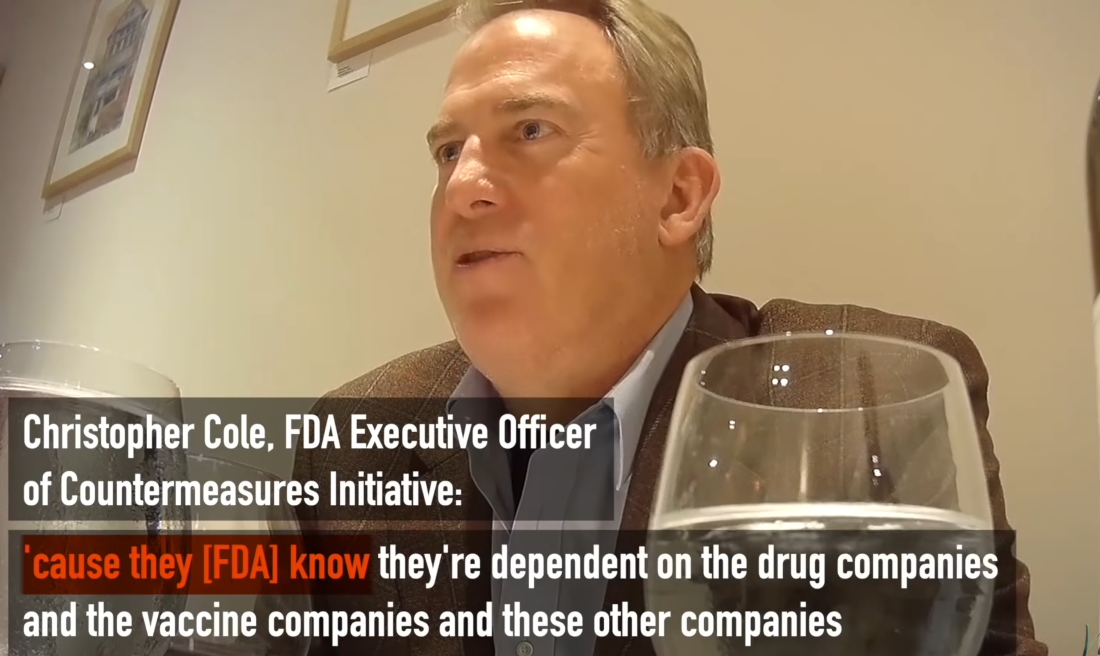 The Food and Drug Administration’s executive officer has revealed, in a stunning interview captured on video by Project Veritas, his agency’s uncomfortably close ties to Big Pharm and America’s largest food companies.

“The drug companies, the food companies, the vaccine companies … they pay us hundreds of millions of dollars a year to hire and keep the reviewers to approve their products,” says EO Christopher Cole, who went on to discuss (on hidden camera) the agency’s inner workings to include FDA conflicts of interest, how it overspends, and why it is difficult for staffers within the agency to talk publicly about the abuses.

He also talked about what impact Big Pharma companies have on the FDA’s processes, including those for getting new drugs approved.

“A long time ago, Congress approved user fees for [the] FDA. Basically, we charge the industry millions of dollars in order to hire more drug reviewers and vaccine reviewers, which will speed up the approval process, so they make more money,” Cole revealed.

He went on to say that the agency reduces the impact that the user fees have on the FDA’s overall operations because “they’re dependent on the drug companies, and the vaccine companies and these other companies for their agency to operate.”

Cole also said that additional money brought in by the FDA “gets banked” so that it can ultimately be spent on “whatever you can, whether it’s right or wrong.” And he talked about reasons why it’s hard for anyone working for the federal government, including the FDA, to speak out about practices he believes are “probably excessive.”

“I don’t think there’s enough people saying they’re, like, ‘Look, that’s fine, but that’s not right. So, we’re not going to charge that.’ You don’t want to be that person. You’re not going to have a long shelf life in the agency if you’re always that person,” Cole admitted.

Cole’s LinkedIn page lists him as an Executive Officer within the agency’s Countermeasures Initiatives, which plays a critical role in ensuring that drugs, vaccines, and other measures to counter infectious diseases and viruses are safe. He made these revelations on a hidden camera to an undercover Project Veritas reporter.

As expected, the FDA completely denied Cole’s allegations and even tried to downplay Cole’s role at the agency.

“The person purportedly in the video does not work on vaccine matters and does not represent the views of the FDA nor does he speak on behalf of the agency,” the FDA noted in a statement to Project Veritas.

“User fees provide instrumental funding for the FDA’s independent review of medical products that make a difference in the lives of all Americans, without compromising the agency’s commitment to scientific integrity, public health and regulatory standards, patient safety, and transparency,” the agency added.

Americans have completely lost control of our government. It’s time to start over.