Has a top scientist from the World Health Organization (WHO) been caught lying to the public about vaccine safety?

According to a Facebook “Fact Check” now appearing on posts containing a link to a YouTube video that claims this is so, the answer is firmly “No”.

But contrary to Facebook’s denial, the video’s central claim is true: the WHO scientist in question has in fact been shown to have blatantly lied to the public about vaccine safety.

Consequently, it is Facebook and its “fact checkers” who are hypocritically misleading Facebook users about vaccine safety.

On November 28, 2019, the WHO published a YouTube video with the title “WHO works to ensure vaccinations are safe”. The description states, “When you take a child to be vaccinated you trust that s/he will get a safe and effective vaccine, given in the right way. That trust relies on the existence of effective vaccine safety systems. See how WHO works with countries to strengthen vaccine safety monitoring to prevent untoward effects of vaccination.” (Bold emphasis added.)

The claims that Dr. Swaminathan makes in this video are critical context for understanding how Facebook and its supposed fact-checkers are deceiving people. In the quotes from the video that follow, I’ve used bold text to emphasize key claims.

The WHO video introduces us to Dr. Soumya Swaminathan as its “Chief Scientist”. She introduces herself as a “pediatrician by training” from India. After discussing the dangers of “vaccine preventable” diseases, she assures us: “Vaccines are very safe. If someone gets sick after vaccination, it is usually either a coincidence, an error in administering the vaccine, or very rarely, a problem with the vaccine itself. That’s why we have vaccine safety systems. Robust vaccine safety systems”—(as she says this, the text “Robust vaccine safety systems” animates into the frame to reinforce the message to the viewer)—“allow health workers and experts”—(the word “Experts” animates in)—“to react immediately to any problems that may arise.” (The word “Examine” appears on the screen as she continues.) “They can examine the problem and rigorously and scientifically look at the data”—(at this point, the viewer is reading the words “Scientifically look at the data” on the screen next to “Robust vaccine safety systems”)—“and promptly address problems.”

She adds, “WHO works closely with countries to make sure that vaccines can do what they do best: prevent disease without risks.” (The viewer is now looking at large text reading, “Prevent disease without risks”, which is animated to jump out a bit momentarily at the viewer—just a little pop for added effect to make sure the words are noticed and written into the viewer’s memory.)

The central message is unambiguous: “Robust vaccine safety systems” already exist in countries everywhere that enable scientists like those working at the WHO to ensure that vaccines administered to children confer benefits “without risks.”[1]

What the WHO Knows about Vaccine Safety 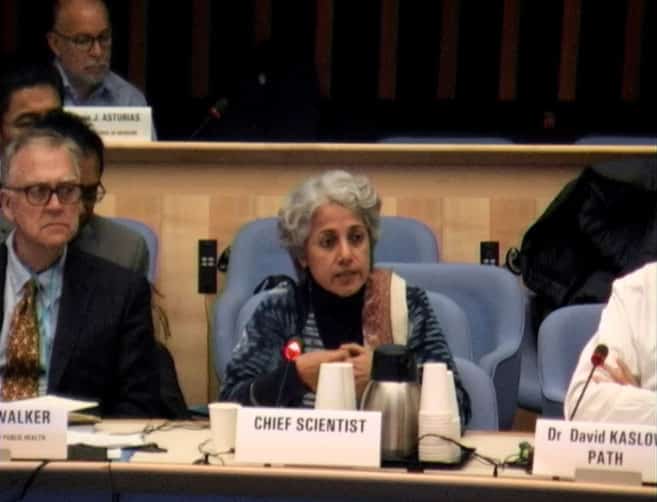 Just five days later, on December 3, the second and final day of a WHO “Global Vaccine Safety Summit” in Geneva, Switzerland, Dr. Swaminathan conveyed a very different message for her assembled colleagues.

Once again, I have used bold text in the following quotations to emphasize key points from her remarks.

The focus of her statements, recorded on video and published on the WHO website, was the perceived need to develop even more vaccines and ensure high uptake among populations. But, she elaborated, there are obstacles to achieving this goal. As always, she said, “there are the skeptics and the critics and people who will constantly be pointing out the risk of side effects and making associations and so on.”

That is to say, people who point out “constantly” that vaccination entails the risk of side effects, in her view, are “critics” who stand in the way of the WHO achieving its policy goals.

She blamed a low uptake for the HPV vaccine in India on critics who associated the vaccine with adverse events and deaths that, according to her, were due to other causes.

Nevertheless, she emphasized, a major obstacle to achieving high uptake is public concern about vaccine safety. To overcome this problem, she suggested, there is a need for stronger “pharmacovigilance”, which refers to how scientists monitor population data to try to detect adverse events associated with pharmaceutical products.

In that context, she told the assembly,

I think we cannot overemphasize the fact that we really don’t have very good safety monitoring systems in many countries, and this adds to the miscommunication and the misapprehensions because we’re not able to give clear-cut answers when people ask questions about the deaths that have occurred due to a particular vaccine, and this always gets blown up in the media. One should be able to give a very factual account of what exactly has happened and what the cause of deaths are, but in most cases, there is some obfuscation at that level, and therefore there’s less and less trust in the system.

In the context of the overall policy goal of achieving high vaccine uptake, she went on to address the question of how to communicate to the public about the risks. She advised, “I think the role of science within the system, the government, [is] really making it very explicit and clear, and being willing to be transparent and open about what is expected and what might not be known at the time of the introduction of the vaccine.”

“Putting in place the mechanisms”, she went on to say, to be able to monitor and detect vaccine-associated adverse events is important because, just as many times adverse events caused by pharmaceutical products were only identified years after the drug had been licensed and marketed to the public, “unexpected things could arise after vaccination, and one always has to be prepared.”

Drawing near to her conclusion, she told the assembly: “So I think that risk is always there, and I think the population needs to understand that and feel confident that mechanisms are being put in place to study some of those things.”[2]

In sum, the central message Swaminathan had for her colleagues was that legitimate concerns about vaccine safety were an obstacle to be overcome in order to achieve the policy goal of increasing demand for these pharmaceutical products. To overcome that challenge would require addressing some of those legitimate concerns by strengthening vaccine safety monitoring systems that in many countries are presently inadequate and don’t enable scientists to determine whether a vaccine-associated adverse event was likely coincidental or caused by vaccination.

Certainly, in light of her acknowledgment that the risk of vaccines causing adverse events is “always there” and that safety surveillance systems in “many countries” are inadequate, it cannot be said that Dr. Swaminathan was being transparent and open in the WHO video published five days prior on YouTube.

Merriam-Webster defines the verb “lie” as “to make an untrue statement with intent to deceive” or “to create a false or misleading impression”.[3] Certainly, when Swaminathan told the public in her YouTube video that existing robust safety surveillance systems ensure that childhood vaccines can be given “without risks”, she was lying.

On January 9, 2020, on his show The HighWire, host Del Bigtree—a former producer of the CBS medical talk show The Doctors and producer of the documentary film Vaxxed—highlighted the dishonesty of Dr. Swaminathan’s public message in the WHO video by juxtaposing it with her remarks at the WHO summit.

Titled “W.H.O CHIEF SCIENTIST CAUGHT LYING TO THE PUBLIC”, the description for the HighWire video on YouTube reads, “Dr. Soumya Swaminathan, Chief Scientist at the W.H.O., addresses the world in a promotional video where she ensures the robust existence of effective vaccine safety systems and the overall safety of vaccines. Five days later, here is her diametrically different opinion behind closed doors at the Global Vaccine Safety Summit on Dec. 3rd, 2019.”

Below that, the description notes that the source of the video is the WHO, and a link is provided to the summit webpage, along with a note specifying that the clips are taken from the Tuesday afternoon session video starting at the “0:29:15” timestamp.

The HighWire video shows Dr. Swaminathan claiming in the WHO YouTube video that robust safety monitoring systems exist that ensure that vaccines confer benefits “without risk”, then juxtaposes that public message with clips of her remarks at the summit.[4] (Another link is provided to a full episode of The Highwire presenting this and numerous other examples of how the public message from the WHO diverges from acknowledgments officials made at the summit about numerous legitimate safety concerns.[5])

The only misleading aspect of the HighWire video is the description that says she was speaking “behind closed doors” at the summit, which implies that the meeting was taking place secretly or without public knowledge.[6] As already noted, videos of the speakers at the summit were published on the WHO website (and are still available there at the time of this writing), so she was not speaking “behind closed doors”. While this is regrettable hyperbole, in fairness, The HighWire’s description on YouTube does cite the WHO website as its source, and the key point being communicated must not be overlooked, which is that the WHO’s chief scientist did indeed have one message intended for mass public consumption and a contradictory message intended for her colleagues within the WHO.

There is no context from which any of the shown clips were cut that alters or in any way belies that legitimate point. The WHO’s chief scientist had indeed been caught deliberately lying to the public.

How Facebook Hypocritically Misleads Users with Its “Fact Check” Warning

Presently, on posts containing a link to the HighWire video, Facebook is warning users that the video has been “Checked by independent fact-checkers” and found to contain “Partly False Information”. 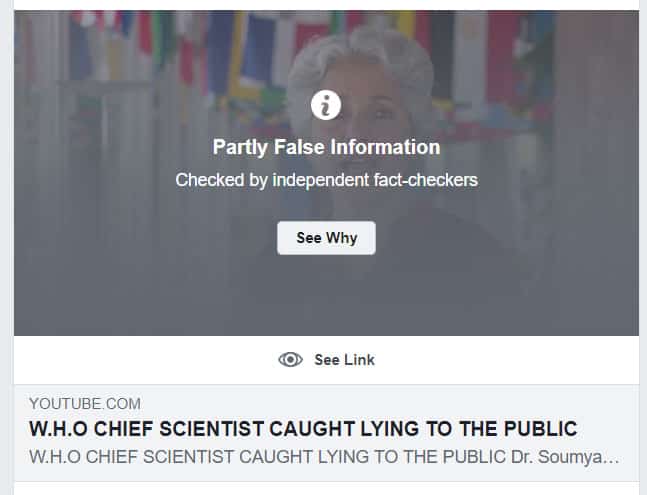 Below the post, Facebook presents links to two “Fact-Check” articles, one by Natalia Sanguino of Agence France-Presse (AFP) and another by Wayne Drash of Lead Stories, the headlines of which tell Facebook users that the HighWire video’s title communicates a false claim.