A NEW “MEDICAL HITLER” – Biden declares himself medical DICTATOR, threatens to nullify states’ rights and coerce the entire population into taking deadly vaccine jabs against their will

We should be celebrating this moment of clarity, for Biden’s audacious actions have just turned half of America into a powerful new vaccine resistance movement. As the following map shows, state leaders in about half the states have openly declared their resistance against Biden’s authoritarian power grab. Many states have announced their intent to file lawsuits, and Texas Governor Abbott has already issued an executive order protecting medical choice for Texans. 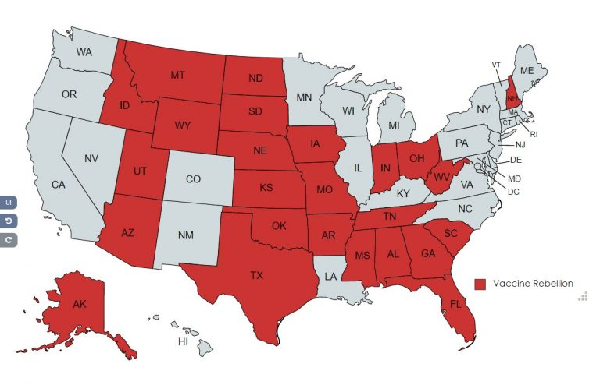 All the following states have announced their intent to sue the Biden regime over these vaccine mandates:

Joe Biden just declared war on 80 million Americans and threatened to REMOVE governors from power… this is treason!

As part of his dictatorial decree, fake president Joe Biden declared that he would remove governors from power if they don’t comply with his vaccine mandates. This is, of course, an act of treason and war against the United States of America, and it opens the window for the white hats in the US military to remove Biden from office and declare his “rule” to be an unconstitutional occupation.

From Biden: “If they’ll not help — if these governors won’t help us beat the pandemic, I’ll use my power as President to get them out of the way.”

Of course, “get them out of the way” means Biden plans to try to arrest and remove the governors, then rule of America as a dictatorial tyrant. In essence, Biden just initiated the civil war in America and proved why he must be removed from power (and why Democrats in general can never be trusted with any political power whatsoever).

Governors, state legislators, AGs and other officials pushed back hard. Check out these statements from state officials, courtesy of The New American:

As Connor Mortell from Mises.org correctly states in response to all this, fake president Biden has just declared a “fascist pharma corporate state” that he hopes will rule over America:

Never in my lifetime has something occurred that was so egregiously opposed to Misesian concepts of liberalism and freedom. In fact, this is directly in line with perhaps the most opposite ideology to liberalism: fascism. Benito Mussolini said himself that “Fascism should more appropriately be called corporatism because it is a merger of state and corporate power.” In today’s political discourse, people abuse the word fascism and sometimes even cite this definition of corporatism while stretching it somewhat from the truth. However, the state requiring that businesses require the vaccine from one of three large corporations that were propped up by the state is undoubtedly the merger of state and corporate power that Mussolini dreamed of.

Jordan Schachtel writes on Substack.com that, “The Biden Admin is losing its unwinnable War On COVID, so they’re scapegoating ‘unvaccinated’ Americans:”

On Thursday, our newfound Dear Leader, Joe Biden, gave one of the most tyrannical speeches in American history. For 30 minutes, he declared that the federal government would be imposing one totalitarian action after another, entirely dismissing our Constitutional system in the process of announcing his edicts.

I sense a panicked regime, very unsure of its legitimacy with the people, and one that is desperately searching for a more permissible excuse for their failures.

The Biden Administration is losing its unwinnable “War on COVID,” and as its ratings go down in flames, it has backed itself into a corner. Instead of being honest about their failures with the American people, Biden officials are choosing to triple and quadruple down on these broken policy measures. They’re purposely pitting Americans against each other, and labeling the “unvaccinated” as the ultimate scapegoat for their failures.

We have now arrived at the moment where mass civil disobedience is necessary to end this overt medical tyranny. As JD Vance is now openly calling for, the American people must peacefully rise up and resist this tyranny.

Children’s Health Defense has just announced that next week will be “Walk Out Week” where all Americans who are ordered to take mandatory vaccines should walk out of their places of employment and say NO to the medical tyranny.

Democrats who once chanted, “My body, my choice!” are now screaming, “Your body, OUR orders!” This just proves, of course, that they never believed in “my body, my choice” in the first place. (They simply wanted to murder more babies as part of their demonic human sacrifice rituals.)

Get full details on all this (and more) in today’s Situation Update podcast:

Find new podcasts and amazing interviews each day at: