It is definitely not normal for young athletes to suffer from cardiac arrests or to die while playing their sport, but this year it is happening. All of these heart issues and deaths come shortly after they got a COVID vaccine. While it is possible this can happen to people who did not get a COVID vaccine, the sheer numbers clearly point to the only obvious cause.

So in response to their pronouncement, here is a non-exhaustive and continuously growing list of young athletes who had major medical issues in 2021 after receiving one or more COVID vaccines. Initially, many of these were not reported. We know that many people were told not to tell anyone about their adverse reactions and the media was not reporting them. They started happening after the first COVID vaccinations. The mainstream media still are not reporting most, but sports news cannot ignore the fact that soccer players and other stars collapse in the middle of a game due to a heart attack. Many of those die – about 50%.

We really appreciate the athletes named in this list who have confirmed what happened to them so the truth can be known.

Sidelined Athletes with “Illness” Not Included in This Report

Many sports teams now have multiple sidelined players. There are dozens of them. The teams and Big Media are hiding this, thinking nobody will notice. These damaged players will not be shown in this report if they are reported only as “illness” but they would be worth tracking, because it is not normal to have so many. Their immune systems are likely to have been compromised by “something,” so they will be open to many things they would normally have been able to shrug off. We leave it to others to track these – we have our hands full handling the investigations for this list, going back in time trying to find new information that wasn’t available before, and making minor corrections as they are discovered. It will all come out eventually. 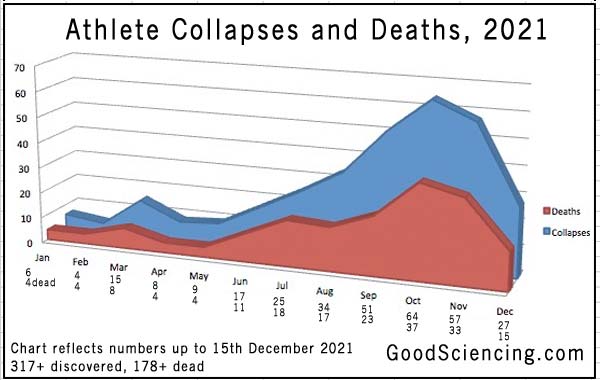 Here is a non-exhaustive list of injuries reported. Most were cardiac arrest.

This story will grow over time, as new information is added. If you have proof of information that we don’t already have, or if you have a correction, please send it through our contact form, with as much information as possible. Useful information would be the person’s name, age, what happened to them, if they had the COVID vaccine(s), date of death, link to any news story.

Special thanks to readers who have provided corrections, found errors that we missed, or provided new information we didn’t know about. It is now a real team effort and we appreciate it.

For the skeptics who believe this is normal, feel free to repeat the following 18 words, after reading each record or name in this list.

Repeat This After Reading Each Line