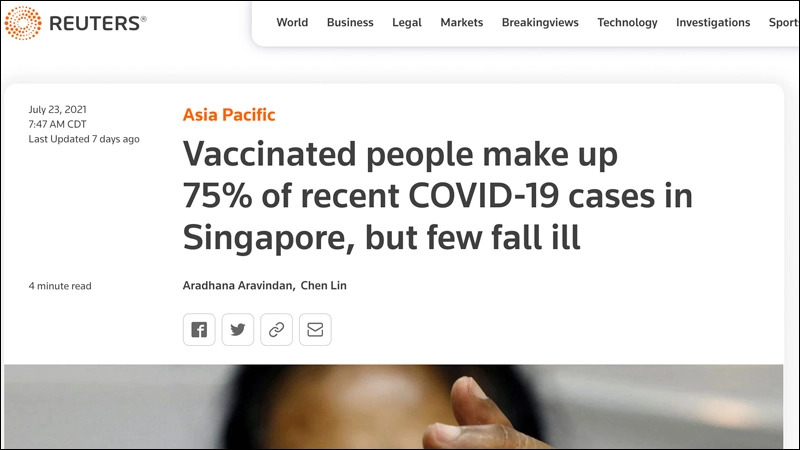 A massive spike in new “cases” of the Wuhan coronavirus (Covid-19) has struck Singapore, one of the most “fully vaccinated” countries on earth with about an 81 percent compliance rate, according to the latest data.

Surging infections due to mass injection are stymieing efforts to reopen the country as “fully vaccinated” residents flood hospitals in desperate need of oxygen and other treatments.

Over the weekend, the number of patients requiring oxygen in Singapore doubled, showing that the injections they call “vaccines” are failing to provide the promised protection against Chinese Germs.

Compared to most other nations, Singapore was exceptionally quick to accept the Fauci Flu shots. Its residents lined right up and rolled up their sleeves, only to now face the consequences of antibody-dependent enhancement (ADE) and other spike protein damage.

Injection rates have plateaued, reports indicate, as the vast majority of Singapore has taken all of the currently available shots pushed by the government. To now be seeing this spike in new infections and hospitalizations has some people questioning how and why this is happening.

“Infections over the weekend were more than a combined 1,000 cases, a tenfold increase from a month ago,” reported Reuters.

“Many experts, though, are not overly concerned about the rise in infections because of the low number of serious cases and Singapore’s high vaccination percentage.”

Vaccinated people are killing others with spike protein “shedding”

Early on in the plandemic, Singapore was one of the first countries to report any Wuhan coronavirus (Covid-19) infections at all.

Along with Australia, Singapore announced to the world that the China Virus had been detected there, which sent the global media into a tailspin.

Fast-forward to now and Singapore is leading the way in both vaccine compliance and simultaneous accelerated spread of the Wuhan Flu and its many “variants” – which are still being blamed, in many cases, on the “unvaccinated.”

There is no evidence to suggest that healthy, unvaccinated people are spreading anything other than their untainted existence, but the mainstream media wants you to believe that they are the disease vectors as opposed to the fully vaccinated.

Ironic is the fact that the plandemic would have long been done and over with had everyone just said no to vaccination. Thanks to the vaccinated, we now have variant after variant spreading around unfettered, leaving in its wake misery, suffering and death.

And things are about to get a whole lot worse as the first round of “booster” shots gets distributed. These secondary jabs will cure everything, we are told, though the reality is that the world is about to experience another “wave” of hell because of them.

“If by offering booster shots to the people, including young adults, Singapore is able to relax its restrictions quicker especially with respect to reopening Singapore’s borders, then this may be an existential decision that the government is forced to take,” announced Teo Yik Ying, dean of the Saw Swee Hock School of Public Health at the National University of Singapore.

In other words, Singapore is still clinging to the Branch Covidian doctrine that more injections will equal better health outcomes – even though the data shows the opposite to be true.

The world will apparently have to learn this all the hard way, though, as there appear to be no signs of the plandemic agenda relenting anytime soon. It will be booster shot after booster shot until the end of time – or until people decide that enough is enough.

As people continue to suffer and die due to the vaccines, we will keep you informed about it at ChemicalViolence.com.