A 17-year-old girl is facing the prospect of never walking again in yet another unnecessary, unfortunate maiming of a child.

Ms. Jasmine Comeau received her first Pfizer mRNA injection sometime in mid-August. She suffered no apparent adverse effects. There appears to be a mandate in New Brunswick requiring anyone accessing “indoor organized group recreational sports, classes and activities” to show a vaccine passport. All children turning age 12 by the end of 2021 are eligible for the injections in New Brunswick, according to CBC News.

Jasmine received the second injection on September 22. She immediately experienced “flu-like symptoms” and a “choking reaction,” according to her father, André Comeau. Jasmine’s parents live apart. Her mother, Diane Siemens, is a nurse, re-married, and appears to have majority custody. André has consistently posted anti-vaxx content on Facebook since at least April. He acknowledged the post-AstraZeneca death of Mrs. Lisa Stonehouse on May 7, and the post-Moderna neurological adverse effects of Mr. Fred Pye on July 15. Both were/are Canadian. 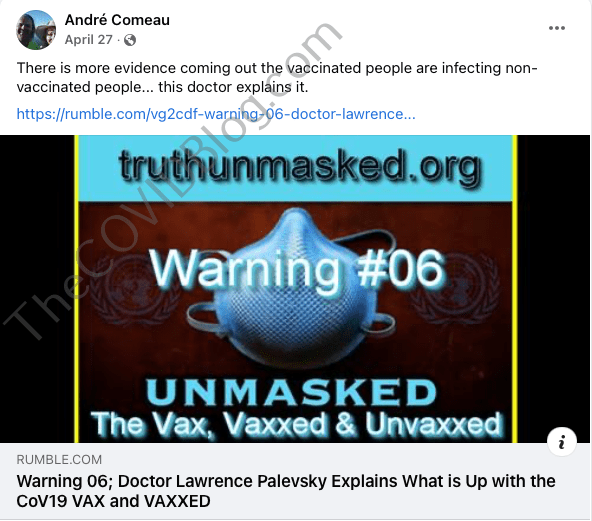 Jasmine lost feeling in both her legs and feet within four days after the second injection. She also suffered the dreaded “pins and needles” feeling throughout her body, along with full-body excruciating pain. She was admitted to Horizon’s Miramichi Regional Hospital, where she spent four days undergoing a battery of tests. Doctor discharged Jasmine with a walker and no explanation as to her condition.

Jasmine loses use of her left leg

The pain intensified and by October 1, Jasmine was unable to move around by herself even with the walker. Her left leg was essentially paralyzed. Jasmine was re-admitted to Miramachi and placed in a wheelchair. She was transferred to Saint John Regional Hospital the next day. Doctors believed it was a good idea to give her morphine for the pain. Jasmine had a “violent reaction” to the powerful drug. After eight days of tests, she was discharged again with no real answers. Doctors prescribed high-dose gabapentin, an anti-epilepctic and pain killing medication with a slew of deadly side effects.

The specialist says she will recover but will take months even a year or more of intense therapy. How can they say that, when they have no idea when the mRNA shot will stop making your cells produce spike proteins that obviously causing inflammation and pain. This is all new to them. 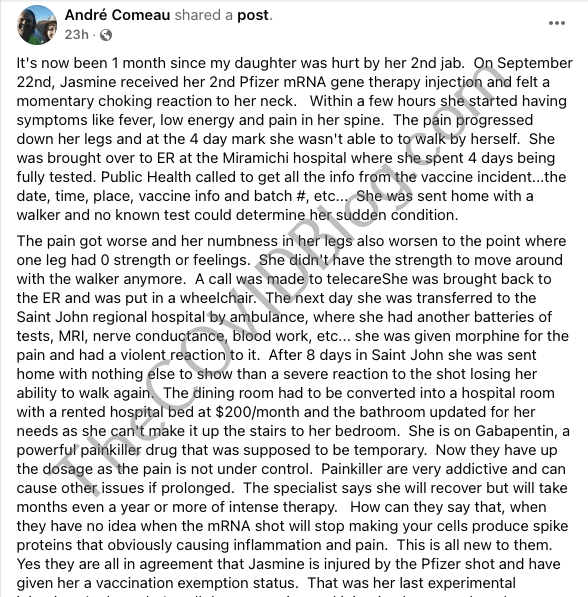 The only thing Jasmine and her family know for sure is that the Pfizer mRNA injections caused her condition. Jasmine received the shots apparently so she could go to in-person classes for her senior year in high school. She now does all school work from a hospital bed in her mother’s home that costs $200 per month to rent.

Jasmine has “a long road ahead,” according to Mrs. Siemens. But this is literally uncharted territory for doctors. Their guess as far as Jasmine ever walking again is as good as mine, as a journalist with no medical training (except for an EMT course many years ago). We’ve reached out to Mr. Comeau and will update if/when we hear back from him.

None of these stories are “fun” to write. But the ones involving children are gut-wrenching and sad. Little Maddie DeGaray, the 13-year-old from Ohio, has become the literal poster child for maimed, post-injection children. But at least she’s still alive with a snowball chance in hell of recovery. Jacob Clynick is the 13-year-old Michigan boy who died three days after his second Pfizer mRNA injection. Azorean Tatum is a 16-year-old Tennessee boy who died within days after his Pfizer injections.

The only hope for kids in this dystopian COVID vaxx era is their parents. Unfortunately most parents are failing their most basic duty – to protect their babies. We have at least three active cases over at COVID Legal USA where we’re assisting law firms with cases of divorced parents fighting over these injections. One parent is always a vaxx zealot who cannot see past mainstream media propaganda. The other is a critical thinker fighting against both the opposing parent and the compromised legal system.

It’s getting increasingly difficult to give these parents passes. It’s even worse with the pregnant women receiving these injections, and their babies dying (coincidentally of course) in stillbirths or worse. Bottom line is that parents are accountable for their children’s health and safety. What side of history will you, as a mother or father, be on?

Stay vigilant and protect your friends and loved ones.