NASHVILLE — Mr. Shawn Kuhn was a 21-year-old college student we wrote about a couple months ago. He received his second Pfizer mRNA injection sometime in May 2021. Mr. Kuhn was hospitalized with a condition mainstream media called “COVID-19 pneumonia” by late August. He was in-and-out of Georgia hospitals for the next six weeks before being intubated in an intensive care unit. He died on October 11.

Mainstream media headlines read, “Vaccinated student died of COVID-19.” The University of Georgia student newspaper headline read, “UGA student dies of COVID-19 complications.” At the time, “breakthrough COVID-19 case” was the mainstream media propaganda term most often used for these types of deaths. That term is apparently obsolete now. The “COVID pneumonia” thing is out of the same playbook they used to create so-called Omicron.

Mainstream media are now relying solely on what Belgian professor of clinical psychology, Dr. Mattias Desmet, calls mass formation psychosis among the global populace. Mainstream media and government can literally get away with any and all COVID-19 propaganda in 2022 no matter how ridiculous and contrary to reality it may be.

Alexis told WKRN reporter Allie Lynch that her father “started to clot in his lower region…from his legs and started to work up.” She almost verbatim described a thromboembolism, a common adverse/deadly reaction from the mRNA injections. But reporter Lynch failed to follow-up on this information and allowed the fallacious “death by COVID-19” narrative to continue unabated. Alexis is unwilling or psychologically incapable of connecting the very obvious dots between the Pfizer injection and her father’s death.

Dr. Ndina spent the last two weeks of his life in a hospital before passing away on December 20, less than three weeks after the Pfizer injection. Granted everyone grieves differently. But the video version of the story shows an eerily jovial (and masked) Alexis as she describes the death of her father.

Alexis’ final message about her father is perhaps the most obtuse, tone deaf statement we’ve ever written on this blog.

“To continue his legacy I want everyone to stay proactive in being healthy because that’s what he would have wanted.”

There is a GoFundMe page collecting funds for the Ndina family. However we won’t be linking it here. Dr. Ndina is also survived by his wife and one other adult child.

Warning – the following is not a joke. Israel diagnosed its first case of “flurona.” Zionist media described it as “a simultaneous coronavirus and influenza virus infection.” Coincidentally or otherwise, Maryland-based Novovax began testing its flurona vaccine this past September. In other words, big pharma creates the drugs, mainstream media create the narrative, and the sheep obsequiously graze in the matrix.

Ever since the so-called pandemic commenced, this blogger has been trying to figure out how and why the masses are so inert, so acquiescent when the facts and truth are right in front of them. A Twitter user named Rickard emailed us several videos of the aforementioned Dr. Mattias Desmet. The term “mass formation psychosis” is trending on Twitter in the United States as this article is being written. 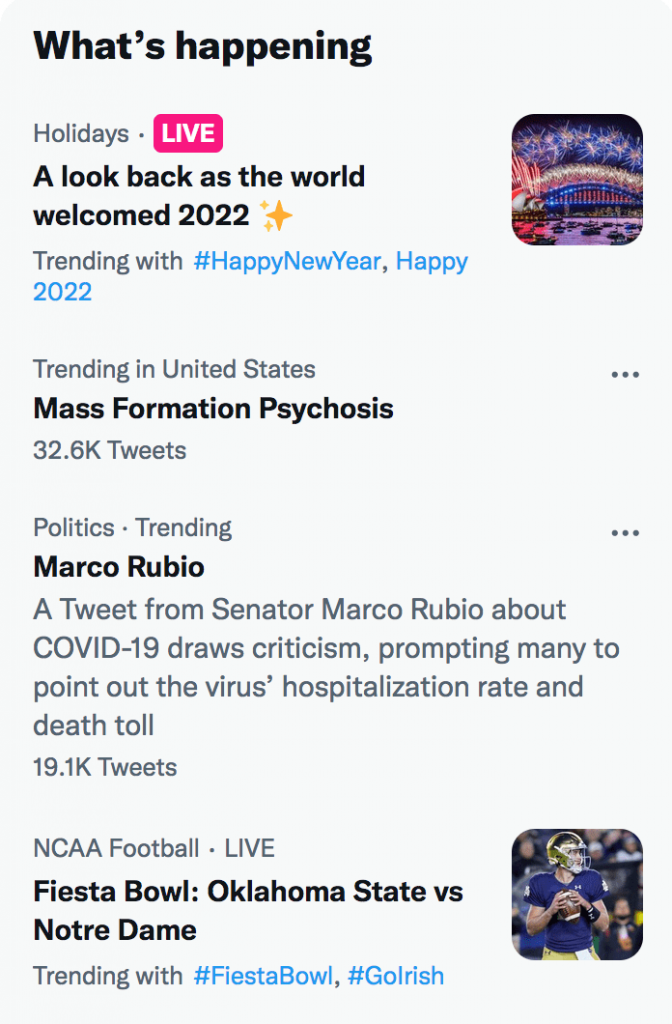 That’s because Dr. Robert Malone, one of the pioneers in mRNA technology, spoke about it on a recent Joe Rogan podcast. He was speaking about the work of Ghent University’s Dr. Desmet. “You need the mass media to create a mass phenomenon at that scale,” Dr. Desmet said in reference to Nazi Germany and the former Soviet Union. The following is an excellent conversation between attorney Reiner Fuellmich, Dr. Wolfgang Wodarg and Dr. Desmet, breaking down how seemingly intelligent people are falling for all this COVID/vaccine propaganda.

As Dr. Desmet said, facts no longer matter to the masses. Mainstream media said unequivocally that Dr. Ndina got sick days after the Pfizer injection and died two weeks later. Yet said media still pushed the “he died from COVID” narrative and the masses ate it up. That’s what we’re dealing with. Dr. Ndina’s own family is allowing him to die in vain, and hoping to score big on GoFundMe. But as a journalist, this blogger blames WKRN reporter Allie Lynch for her spineless, Pfizer-sponsored reporting of this particular incident.

As we enter 2022, it’s now a waste of time and energy trying to communicate with vaxx zealots. They are far too indoctrinated, beyond reasoning. It’s every man, every woman, every family for themselves. Stay vigilant and protect your friends and loved ones.