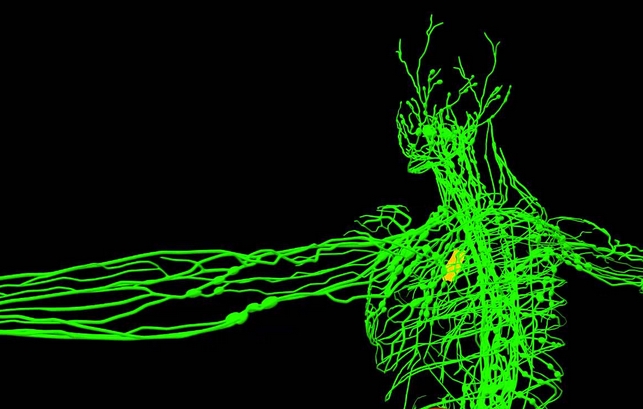 An anonymous radiologist reports a shocking observation in 2021. This radiologist has witnessed a 360-fold increase in unexplained adenopathy following covid-19 vaccinations. Adenopathy is the medical term for swollen glands or swollen lymph nodes (lymphadenopathy). Adenopathy is not a specific disease, but it is an important symptom for some underlying condition. Doctors may not be adequately trained to identify when vaccines are the cause of the adenopathy.

Do covid vaccines cause lymphatic disorders, autoimmune conditions, and/or cancer?

The human body contains approximately six hundred lymph nodes. These lymph nodes carry lymph and are an integral part of the human “immune system.” The fluids that pass through the body’s tissues are first filtered through the lymph nodes. The lymphatic system is responsible for providing white blood cells in order to help fight off infectious bacteria and viruses. If the lymph nodes and glands are swollen, it often indicates the body is fighting off an infection, like a common cold. Swollen lymph nodes are often accompanied by runny nose, sore throat, earache, fever and tiredness. The swelling could also indicate a more serious infection like strep, Lyme or HIV.

An infection is not the only cause of adenopathy. Certain medications such as Phenytoin are known to cause adenopathy. An injury anywhere in the body can cause edema, causing the lymph nodes to swell up near the site of injury. Could the self-replicating spike proteins from the mRNA vaccine be injuring the cells and tissues throughout the body?

Autoimmune diseases such as rheumatoid arthritis can cause inflammation in the lymph nodes, the joints and other organs, causing adenopathy. Lupus is another autoimmune disease that causes inflammation of the lymph nodes, the skin, the organs and the joints. Swollen lymph nodes could also be the result of sarcoidosis. This inflammatory disease is diagnosed when inflammatory cells (called granulomas) grow in different parts of the body, including the lungs. Could immune responsive cells be attacking the body’s own cells in an effort to shut down these transcribed spike proteins?

Adenopathy can also indicate the presence of cancer. The most common ones include lymphoma, which is a cancer of the lymphatic system or a lymph node. The other is leukemia, which is a cancer of the blood and bone marrow. Could covid vaccines be setting the body up for these types of cancers? The evidence is unclear in the short term. The long-term studies, however, are currently underway, and are being carried out live on the population.

Are doctors properly trained to connect vaccines to lymphatic disorders?

During a biopsy, doctors use a needle to remove a sample of the lymph node, so it can be examined under a microscope. The radiologist who spoke out about the rise in adenopathy said the biopsies showed similar results. The biopsies show no metastatic disease and no lymphoma. The swelling is considered “non-specific” and is therefore unexplained and determined to be from unknown causes. The unexplained rise in adenopathy could be pathological evidence for vaccine-induced inflammation, lymphatic disorders and autoimmune conditions that are just beginning to take shape.

Are doctors properly trained to connect lymphatic disorders to the toxins, byproducts and abnormal immune responses elicited by the experimental mRNA vaccines? People who suffer from adenopathy are instructed to ask their doctor why their lymph nodes are swollen. Doctors must record when the symptoms started, how severe they are, and what medications are involved. Doctors will feel the lymph nodes on the skin and check their size. Doctors will investigate the pain level of the lymph nodes and check their size and texture to make a final determination of the cause. Are doctors properly trained to objectively investigate covid-19 vaccines as a potential cause of injury, illness, and cancer? How many doctors have the guts to break ranks with the pharmaceutical companies that have dominated them for years?